The Grand Theft Auto franchise depicts a criminal environment in which players frequently go unpunished for stealing, reckless driving, and murdering in-game. Cars have always been the most prominent component in the GTA franchise.

Throughout the series, Rockstar has introduced a number of supercars. When it comes to the quickest Exotic supercars, GTA Online is no exception. The game includes a wide range of automobiles, including sports cars, luxury cars, and supercars.

Here are the best 5 Sexiest Supercars in GTA 5.

The Deveste Eight is the most insanely cool supercar in the GTA Online Arena War update. The automobile has a unique rearward and a great peak speed with outstanding handling. It may be difficult to manage in turns, but the speed makes up for it. Deveste Eight is an amazing supercar for races and stunts. You can purchase it for $1,795,000 in GTA Online.

The X80 Proto is the fastest exotic automobile in GTA Online, with a top speed of 132 miles per hour. Proto accelerates quickly, has a lot of power and performance, and has a ludicrous futuristic design. It has all of the distinguishing characteristics that make it the best supercar in the game. In GTA Online, it costs $2.7 million.

Tezeract in GTA Online is inspired by Lamborghini has captured the hearts and minds of a lot of players. It is an absolute monster on a race track, capable of a top speed of 138 mph. This is an electric car in GTA ONline that makes less noise as compared to other top vehicles in-game.

The Visione is another sickest car introduced in GTA Online as a part of the Smugglers Run update. The exceptional acceleration gives a player an advantage during races. It is one of the fastest supercars in GTA Online, thanks to its excellent speed. Visione has a fantastic design in addition to butterfly doors. You can get it for $2,825,000 in GTA Online.

If you love thrills, Annis S80RR is fast and that’s all that matters. It’s one of the amazing supercars in the game with a top speed of 133 mph. S80RR has old school design, great handling for high speed. What count is, the S80Rr is one of the fastest cars in GTA Online available for $2,575,000. 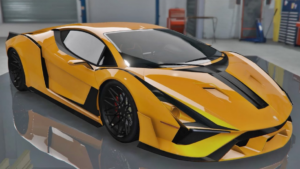